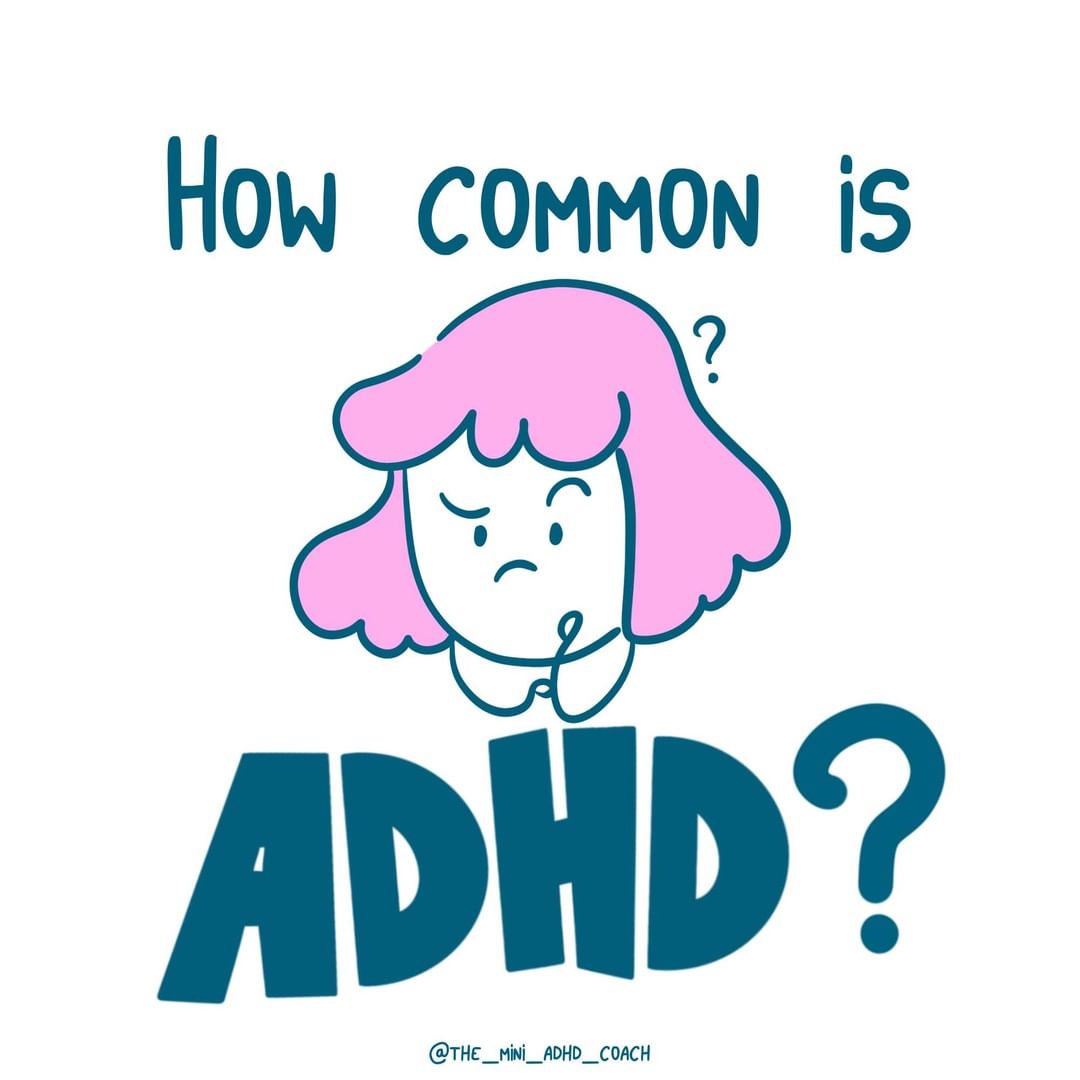 Some think that ADHD is just a trend, but more and more people actually receive their official diagnosis. How common is ADHD, and why is it important to know its prevalence rate? The answers and more in this article.

How Common is ADHD FAQs

These days, some people only see ADHD as a “trend”. They feel like many of those "struggling" with this neurodivergent disorder are simply jumping on the bandwagon because they exhibit some symptoms of Attention Deficit Hyperactivity Disorder 😞. However, according to the National Institute for Mental Health, the number of people diagnosed with ADHD truly rises yearly. But, the prevalence of ADHD may be attributed to the increased awareness regarding ADHD symptoms and not to the actual increase in cases.

In the United States alone, about 4.4% of adults aged 18 to 44 received ADHD diagnoses. That is already a pretty significant number, yet it does not stop there. According to research from the Center for Disease Control, the number of children aged 3 to 17 diagnosed with ADHD in the United States are at about 9.8%, which is equivalent to around 6 million kids 😨.

With these brief statistics on Attention Deficit Hyperactivity Disorder, how common can ADHD be? How can it affect the prevalence estimates worldwide? Can ADHD be considered one of the most common neurodevelopmental disorders? How can ADHD statistics be influenced when people struggling with this neurodivergent disorder are not accurately diagnosed or ADHD stereotypes come into the picture? Let's try to figure out the answers to these questions.

When the first version of the guidelines about Attention Deficit Hyperactivity Disorder was released through the Diagnostic and Statistical Manual of Mental Health Disorder 📘, ADHD was only considered for children 🧒. Adult ADHD symptoms were not yet considered and thus, adults were NOT diagnosed yet. With continuous research and patient-reported data, the American Psychiatric Association released the DSM-5 in 2013. The Edition of the Diagnostic and Statistical manual, according to reports, “has provided more clear diagnostic criteria for adult ADHD.”

However, since ADHD was initially considered a children-only disorder, ADHD stereotypes, such as about school-age boys jumping around and not paying attention in class, still float around to this day. Many people often think that Attention Deficit Hyperactivity Disorder (ADHD) does not affect adults because the symptoms "don’t seem to be pointing to ADHD" or "Attention Disorders are only for children." This may be some of the reasons why many people with adult ADHD 🧑 are not diagnosed and are unaware that their struggles with focus, impulsivity, and hyperactivity can be due to undiagnosed ADHD.

As adults question the validity of their ADHD struggles and the symptoms they continue to have problems with, they likewise try their best to cope with these difficulties. In other words, even without an official ADHD diagnosis, these people will most likely live with ADHD, mask ADHD symptoms or make up for their “shortcomings” by developing other skills 😢.

The bottom line is, the number of undiagnosed individuals may affect the worldwide prevalence of ADHD, and we may not know how common this neurodevelopmental disorder is.

It is essential to know the global rate of people with ADHD to help set up more support groups, create better awareness, and understand how this neurodevelopmental disorder can affect anyone at any age. Knowing the current ADHD prevalence can also give us more insights on the comorbid mental disorders, such as Anxiety Disorder, Substance Abuse Disorder, or Depression 👌.

When we are aware of the number of people diagnosed with ADHD, only then can we start making moves to improve the quality of life for people with this neurodevelopmental disorder. It doesn't matter if you have severe ADHD symptoms or moderate ADHD symptoms. ADHD, compared to other neurodevelopmental disorders, can be managed well. We need to develop a better understanding of how this disorder works and how it affects people to provide better support and prevent severe impairment from our daily lives ❤️.

What happens if you have an environment that is less aware of ADHD? As you perhaps already know, a person with this neurodivergent condition experiences internal struggles, like hyperactive ADHD traits and inattention. Now, with an “unaware environment,” some neurotypicals might misjudge us, not take us seriously, or think that we are only "faking it," further adding to our struggles 😭.  Sometimes, when people are misinformed of different ADHD facts and don't understand how this neurodevelopmental disorder works, they might accuse us of being "lazy" or "stupid."

Besides this, ADHD support is less possible in an unaware environment. For example, in the United States, the number of children with ADHD and adults with severe ADHD symptoms is significantly underestimated compared with the global ADHD prevalence. Because of this “miscalculation,” support centers, mental health professionals, and other people trained to help those with ADHD may not be as available, leading to more struggles for individuals with this neurodevelopmental disorder 👎.

The production of ADHD medication and establishment of treatment facilities can also be affected, as people with ADHD might not have easy access to stimulant medications, ADHD treatment, or other types of support they need to help them manage their symptoms 💊.

Awareness and support are two critical factors to help reduce the struggles that people with ADHD experience. Health statistics show that the number of people with ADHD has been rising over the years, and we need to be prepared in order to provide better support for those who need it. With a better understanding of how this neurodevelopmental disorder works and how common it is among the global population 🌎, we can be equipped with the correct mindset and knowledge to help people with ADHD manage their symptoms and improve their quality of life.

Questions will be left unanswered when someone who experiences symptoms of ADHD decides not to have an ADHD diagnosis because of society or peer interventions. Even though there are available diagnostic criteria for people with ADHD, most times, the way that this neurodevelopmental disorder presents itself in an individual is unique, which can make it harder for them to get diagnosed. ADHD is complex and cannot be contained in a couple of stereotypes and stigma from society's point of view. So, it is still essential to have a health care provider diagnosis.

Here are some of the stereotypes some people may have, which can consequently lead to us experiencing more struggles:

There is a lot more stigma surrounding Attention Deficit Hyperactivity Disorder, and you may learn more about them, as well as the truth HERE. These stereotypes may prevent us from getting an ADHD diagnosis because other people around us may think that we are just making an excuse for our struggles or that other neurotypicals also experience our difficulties.

Remember this: Whether you are diagnosed with ADHD or not, your struggles are valid 🤗, and people from your surrounding cannot take that away from you. No gender or age group can be an exception to having ADHD. It is a complex neurodevelopmental disorder, and we are still trying to understand more about it every day.

If you think you or someone you know may have ADHD, do not hesitate to seek professional help 🧑‍⚕️. A health care provider will be able to give you a better understanding of what needs to be done to manage your difficulties well. And if your health care provider diagnosed you with ADHD, do not let that break you. Your diagnosis does not define you, and you can still achieve great things in life.

Different treatment actions help you manage ADHD and get the most out of it. Social skills training may make us avoid getting social awkwardness and be more confident talking to a large number of people. Behavioral therapy may also assist us in emotional regulation and preventing mood disorders from affecting our relationships with other people. ADHD medication treatment can help us focus on the most important things we need to do. You just have to take that first step to get help.

Seek support from friends, family, or even an online community if you feel more comfortable 🤗. We are always here for you. You are never alone in this journey.

1.  What is the global prevalence rate of ADHD?

‍
Reports say the global prevalence rate of ADHD in children is 2.2%; in adults, it’s 2.8%. However, experts understand that many remain to be undiagnosed.

2. Why is it important to determine how common ADHD is?

‍
Determining how common ADHD is helps people who are suspicious of this neurodivergent condition get diagnosis. Also, when we know the correct prevalence rate, we can better give support to people with ADHD. The government and various institutions can also better calculate how much resources should go to the management of this mental health disorder.

‍
While resources are available for self-diagnosis, it can never replace the diagnosis made by a mental health professional. This is particularly because ADHD presents differently in people.

How Common is ADHD FAQs