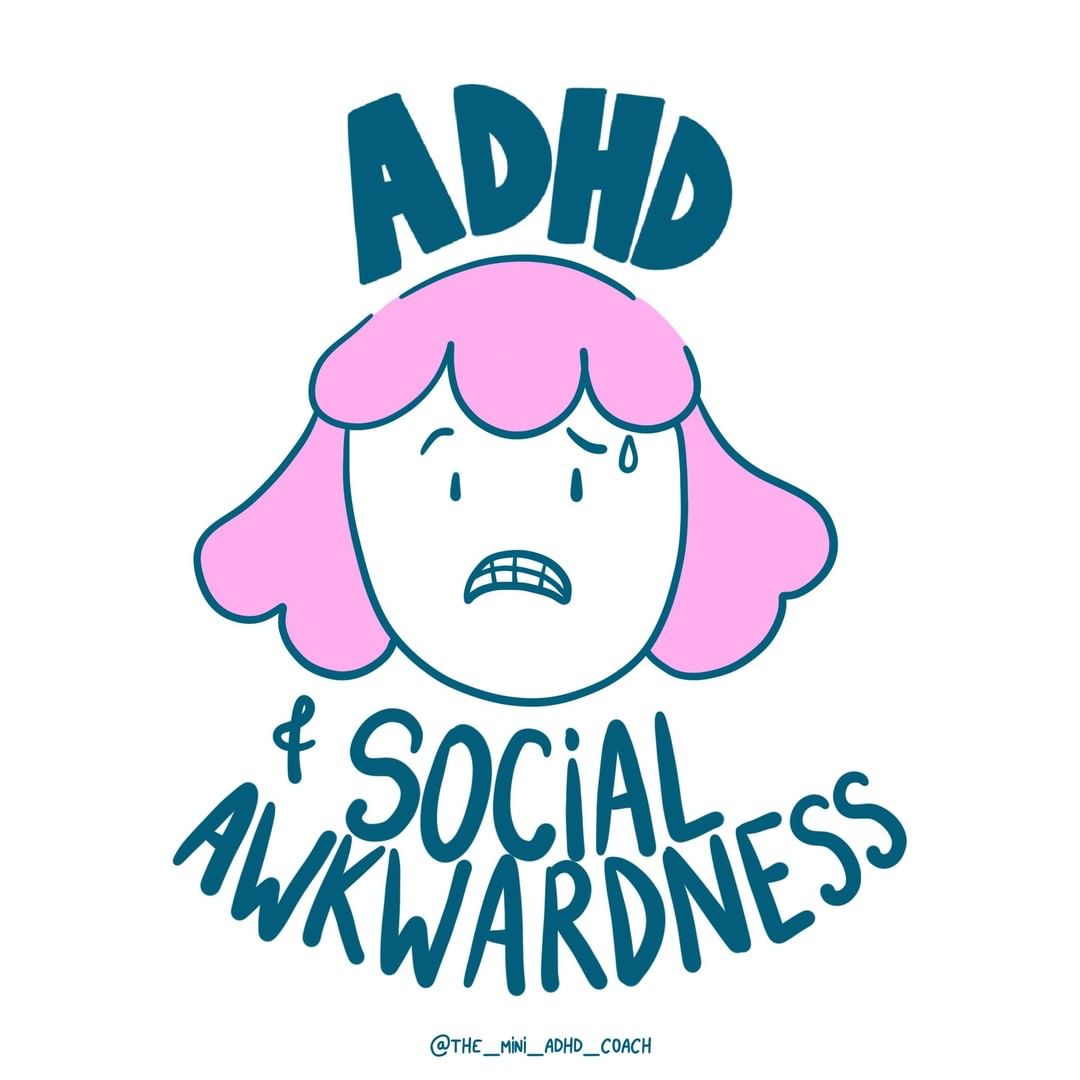 ADHD may result in some symptoms that can make a person “socially clumsy.” If you often find yourself saying and doing inappropriate things during conversations, you might be experiencing social awkwardness. Here’s what you need to know about ADHD & Social Awkwardness.

~ What is Social Awkwardness?

~ ADHD and Social Awkwardness: What To Do?

Having Attention Deficit Hyperactivity Disorder can display symptoms that other people won't understand easily. As a result, these symptoms might cause us some negative judgment. Being constantly on the go, blurting out answers I was never asked, interrupting people, or daydreaming and not focusing my attention on whomever I'm speaking with, might make them think I do not value their friendly approach. 😔

There are a lot of struggles when it comes to managing these symptoms of ADHD. Such struggles can sometimes prevent me from improving my social skills and cause me to become socially awkward with the people I'm dealing with. I sometimes feel that I do not belong with them because of my behavior.

That's why when I have social interactions with other people, say my officemates and colleagues, there's a big chance that I'll manifest those ADHD symptoms and be socially awkward. Many people with ADHD can easily get entangled with social challenges and sometimes experience more social problems if the symptoms are not well-managed.

What is Social Awkwardness?

Social Awkwardness is when we become socially clumsy, meaning we say or do things we shouldn't, often resulting in other people noticing how awkward we are at interacting.

It can also be the feeling of needing to endure a meeting with other people, even though we know we might mess it up because of our social behavior. 😭 Being socially awkward also includes missing social cues or not being able to quickly read the body language of who you are talking with. Of course, it can also be about how our ADHD symptoms can quickly get ahead of us and cause difficult social situations.

Remember that social awkwardness can happen to anyone, even neurotypical people. But with ADHD, you can experience being socially awkward more intensely and frequently.

I think it is because of the mixed emotions we feel during social gatherings that may make us feel bad minutes after. The overwhelming excitement, tendency to overthink scenarios, difficulty focusing, or fear of peer rejection can cause us to struggle with our self-control and experience discomfort around others.Still, there can be countless reasons for experiencing difficulty in social interaction, especially for people with ADHD.

Before thinking of evading every gathering or event, please learn more about social awkwardness first.👌

When talking with my friends, they often hear inappropriate things from me, especially when I am in the mood for the conversation. Sometimes, I blurt out unnecessary comments or opinions that are too unfiltered. It's like thinking of something and then saying it automatically without checking if it’s appropriate. 😅

While still in college, I often got in trouble because of being socially awkward. When I was paired with some random students in a group activity, I would be overly friendly and comfortable, even though I had just met them. After plenty of talks, I'd suddenly realize that I had told them something wrong in certain aspects 😨. As a response, I'd be making myself scarce around them.

Feelings of guilt and shame can get to me quickly, especially since I don't mean to offend the person I am talking with. During the conversation, I am not aware that what I am doing or saying is rude, but then it will hit me some time later. It’s just that we can be so comfortable and impulsive that we tend to say negative things to our friends, co-workers, family members, or other people.

We tend to have difficulty paying attention to what people are talking about because there can be more than a thousand exciting things inside our brains 🧠. Sometimes, our body language shows how uninterested we are in what they are discussing. They can easily sense the social cues of detachment through our non-verbal gestures. This awareness alone can make us feel socially awkward because we struggle to keep up with what they say or mask our inattentive symptoms.

Another thing about our inattention is it makes us less perceptive of how people are acting. Remember that keeping friends may need a lot of effort, and one of those is understanding them in case something is troubling them. But, how do we do that if we can’t “detect” cues that they are not okay or focus on the words they are saying? The social deficits we sometimes create can cost us big when not considered well.

Interaction in social situations like these can make or break peer relationships because, as we all know, good communication only happens when there is an equal amount of listening and talking. However, some people with ADHD can sometimes have difficulty listening to the other party, especially if the topic does not interest them. 🥺

Some adults with ADHD can sound socially off when they talk nonstop about their experiences in different environments. You see, people expect to have fun times and share their experiences and differences during social interactions. After all, this is when you catch up with old pals and talk about life. However, when we are placed in situations where a small number of people speak with each other, we sometimes have the social behavior of talking about ourselves all the time.

Further rejection can happen if we neglect other people's needs to have a good time, too. Some people with ADHD can sometimes have the attitude of talking non-stop about their favorites, stories, or even problems to their peers. We sometimes forget that we might get into social trouble because of that 😵. Plus, this behavior can be draining for you and the person you are conversing with.

In these cases where some of our ADHD symptoms challenge our social skills, it is essential to understand how social awkwardness differs from social anxiety disorder and how being socially awkward can be managed well.

Social Anxiety Disorder makes us afraid of dealing with social interactions; frequently, it won't let us practice social skills because we are caught by our fear of being watched or judged by other people. According to the Diagnostic and Statistical Manual for Mental Disorders, a person with SAD can struggle significantly with making conversation with a stranger, entering a room full of people, public speaking, or having social interactions that can cause distress or rejection.

Meanwhile, Social Awkwardness can make adults socially clumsy. Social awkwardness isn't a part of any mental health disorder but can be significantly felt by the general population. It can affect our relationships with other people, especially if we fail to communicate our intentions well. We might make others slightly uncomfortable if we don't manage our behavior effectively .Anyone can experience social awkwardness, but it can be more common in people with ADHD.

ADHD and Social Awkwardness: What To Do?

As much as possible, immediately acknowledge that you are in the wrong if you realize that you really are. However, spotting mistakes quickly and accepting errors might be challenging because of our ADHD. Here are the things you can do to improve your social skills and have better peer relationships:

If being socially awkward affects your daily life, get the right support from your mental health professional. Ask them about the proper approach on how to deal with these struggles and how to prevent social anxiety from happening.

And remember, we all have our way of interacting with others. Do not feel bad about not being effective in social interactions. Everyone has their strengths and weaknesses and what's more important is what we do with them to be better people. So, cheer up and socialize with others. You are not alone ❤️

1.  What is social awkwardness and can ADHD cause it?

‍
Social Awkwardness is when you find yourself doing and saying something that doesn’t seem to be acceptable in a gathering or conversation. Often, the person with social awkwardness does not mean what they say or do, leading to guilt and or feeling more socially awkward.

2. What’s the difference between Social Awkwardness and Social Anxiety Disorder?

‍
While social awkwardness can mean a person might miss on cues and do or say inappropriate things, they are not afraid of social gatherings or interaction per se. Social Anxiety Disorder drives people to be afraid of facing people and conversing with them. Do note, however, that due to the consequences of social awkwardness, the person may shun or avoid social interactions.

3. How can people with ADHD improve their social skills?

‍
Some people with ADHD experience social awkwardness due to their symptoms. For instance, being impulsive can make them blurt out words or answers. Being inattentive can make them lose focus on the people talking to them. Hence, if you want to improve your social skills, it’s best to manage the contributing traits. Practicing talking with friends and family can also help.

~ What is Social Awkwardness?

~ ADHD and Social Awkwardness: What To Do?