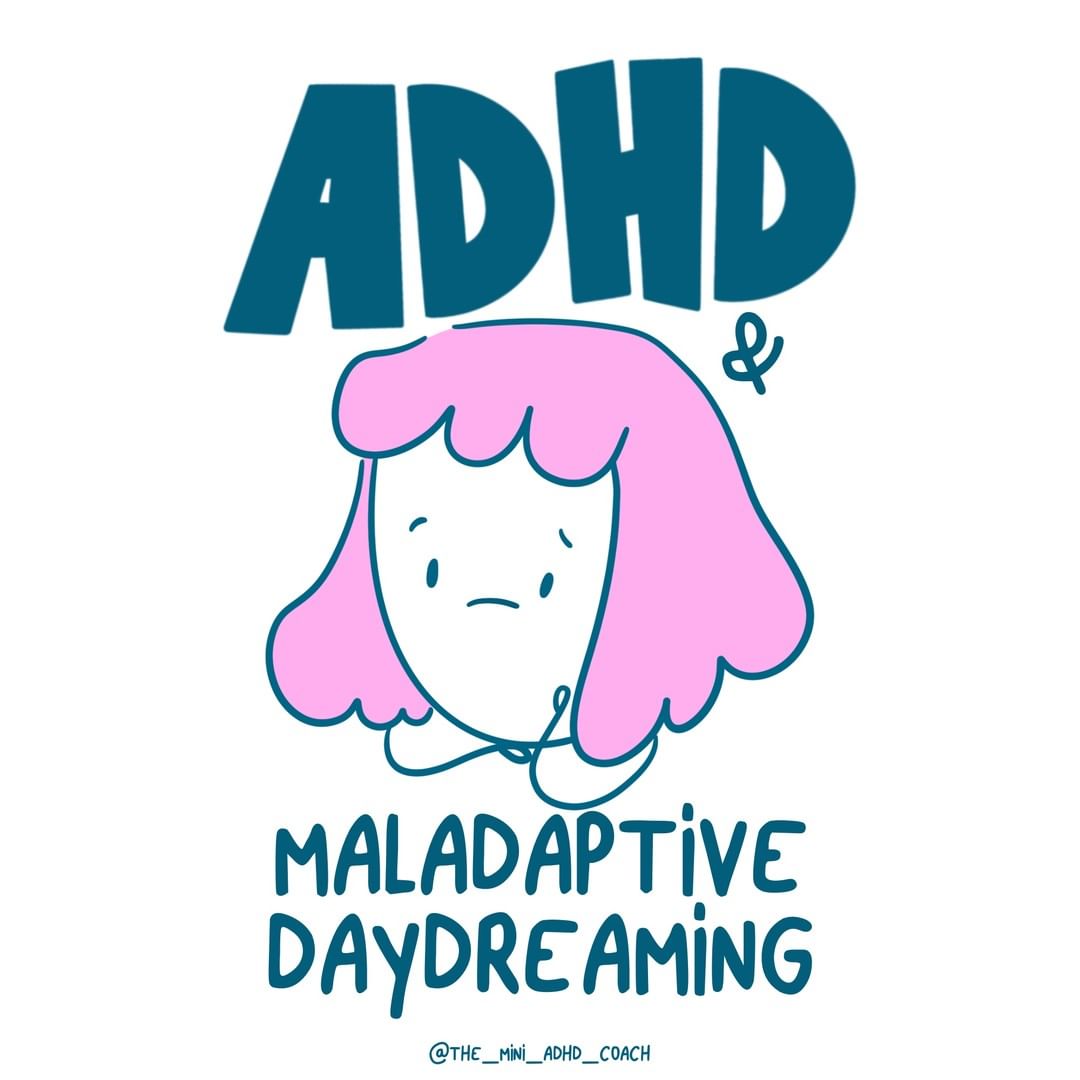 Most people have experienced daydreaming at least once in their life, but did you know that some may experience it so much that it significantly reduces their quality of life? What is maladaptive daydreaming, and does it have a connection with ADHD? Find out here.

4. Maladaptive Daydreaming And Other Comorbidities

What is maladaptive daydreaming? It is characterized by intense daydreaming that can interfere with a person's quality of life. Also called the daydreaming disorder, a person regularly experiences it and, due to their intensity, they can be highly distracting. 😵

Maladaptive daydreaming can often be associated with ADHD. But, how exactly are they related? Are these two disorders the same thing? Let's know more about their similarities and differences here.

Almost everyone is capable of daydreaming. After all, it is natural for us to fuel up our imagination and make a world that’s a bit different from our reality. 😉 For many people with ADHD,  normal daydreaming can be a part of the inattentive ADHD symptoms they might have. It can be an escape from reality or a way to focus on something that interests them. For some people, daydreaming can be so vivid and appealing that they might mistake it for reality.

These fanciful daydreams can be a form of avoidance of reality. It can be used as an escape to cope with a challenging life event, such as previous trauma or abuse.

Some of the inattention symptoms that people with Attention Deficit Hyperactivity Disorder can experience may include difficulty focusing on what they view as uninteresting and daydreaming.

As both disorders (ADHD and maladaptive daydreaming) have daydreaming as a symptom, it can be challenging to figure out which one someone may have.

There are some critical differences between the two conditions that can help us understand which one is which.

Frequent daydreams due to inattention can be a part of the criteria stated in the Diagnostic and Statistical Manual for ADHD. It is noted that a person with inattentive traits may have been daydreaming since childhood to escape the things they are not interested in or are trying to avoid. 😅 Daydreaming has always been a part of the existing diagnostic labels to be considered for an ADHD diagnosis considering it’s connected to inattention. Parents or healthcare professionals may describe it as “spaciness” and may manifest when the child or adult does not respond when they are spoken to.

ADHD-related daydreaming may be distracting, but it often doesn’t detach the person from reality. When they “snap out of it,” they can recognize what the real events are.

Maladaptive daydreaming (MD), on the other hand, is an independent mental phenomenon wherein a person can have detailed and realistic daydreams which are too vivid and can be mistaken for reality. 😨 These excessive daydreams can interfere with a person's quality of life as they can take up too much time. Researchers suggest that Maladaptive Daydreamers have intense and frequent mind-wandering that can later cause inattention. Sometimes, too, they might “act out” the behavior showcased in their daydreams.

The two, however, may independently occur together.

To help us better understand Maladaptive Daydreaming (MD), it is best to know about its signs and symptoms according to clinical psychology. 👌

Though MD isn't recognized yet in the Diagnostic and Statistical Manual for Mental Disorders, we cannot disregard the fact that many people can experience highly detailed and realistic thoughts that can affect the reality they are in. Findings suggest that Maladaptive Daydreaming has these symptoms:

Previous studies for the criteria for MD were based on a structured diagnostic interview, survey, and questionnaire about participants' experiences with their daydreams. The requirements were made to establish the difference between fantasy and reality. However, it can be tricky to know when a dream is maladaptive as it is still subjective. 😔As Maladaptive Daydreaming is relatively new and is still undergoing rigorous research, there are still queries about the clinical picture of this unique mental phenomenon.

People diagnosed with ADHD don't automatically develop Maladaptive Daydreaming. They have to meet criteria specific to Maladaptive Daydreamers for better diagnosis. Hence, being a casual gamer 💻 or liking reading novels 📚 doesn’t necessarily mean that you are a maladaptive daydreamer. It is essential to note that there is no specific line between the two disorders and that they have some similarities in their symptoms.

To be recognized as someone with Attention Deficit Hyperactivity Disorder and Maladaptive Daydreaming, you must experience immersive daydreams, replace real-life situations with fantasy, and have detailed fantasies. Maladaptive daydreamers also have a hard time functioning in their everyday life brought by daydreaming.

It is best to consult a professional for further evaluation 👩‍⚕️  as they can give you an accurate diagnosis through different tests and observations.

According to the recent journal of clinical psychology, up to 77% of the population with Maladaptive Daydreaming also have ADHD. It is essential to know that people with ADHD have a higher chance of developing Maladaptive Daydreaming. The two disorders can be comorbid, which means that they can co-occur with one another.

Maladaptive Daydreaming And Other Comorbidities

Aside from ADHD, other disorders also share the same clinical features as Maladaptive Daydreaming.

As of this writing, Immersive Daydreaming isn't a part of any symptoms of mental disorders and has not yet been recognized as part of the Diagnostic and Statistical Manual.

However, this doesn't mean that the experiences of the people who have it are invalid.🙌 It only shows that there's a need for more studies about Maladaptive Daydreaming. The good thing is that you can always consult a professional about your experiences with daydreaming and ask for help.

There are few articles published recently about the subsequent treatment plans and management of symptoms. However, it is best to consult your mental health professional 👩‍⚕️  if things go south when you produce a highly detailed and realistic daydream that can affect your daily life.

1.  Is maladaptive daydreaming a symptom of ADHD?

‍
No, it’s not. Maladaptive daydreaming is an independent condition that can occur in people with ADHD. ADHD doesn’t cause it, and people may have MD even though they do not have ADHD.

2. Is maladaptive daydreaming a mental disorder?

‍
As of now, it’s not yet a recognized mental health disorder and doesn’t fall under any category in the Diagnostic and Statistical Manual. Many people, however, experience it.

3. What’s the main difference between ADHD-related daydreaming and MD?

‍
The main difference is the ability to recognize reality. ADHD-related daydreaming due to inattention may result in spaciness. But when patients snap out of the dream, they can recognize the real events. Maladaptive daydreaming can detach the person from reality to the point where they act out the behavior of the character in the daydreams.

4. Maladaptive Daydreaming And Other Comorbidities