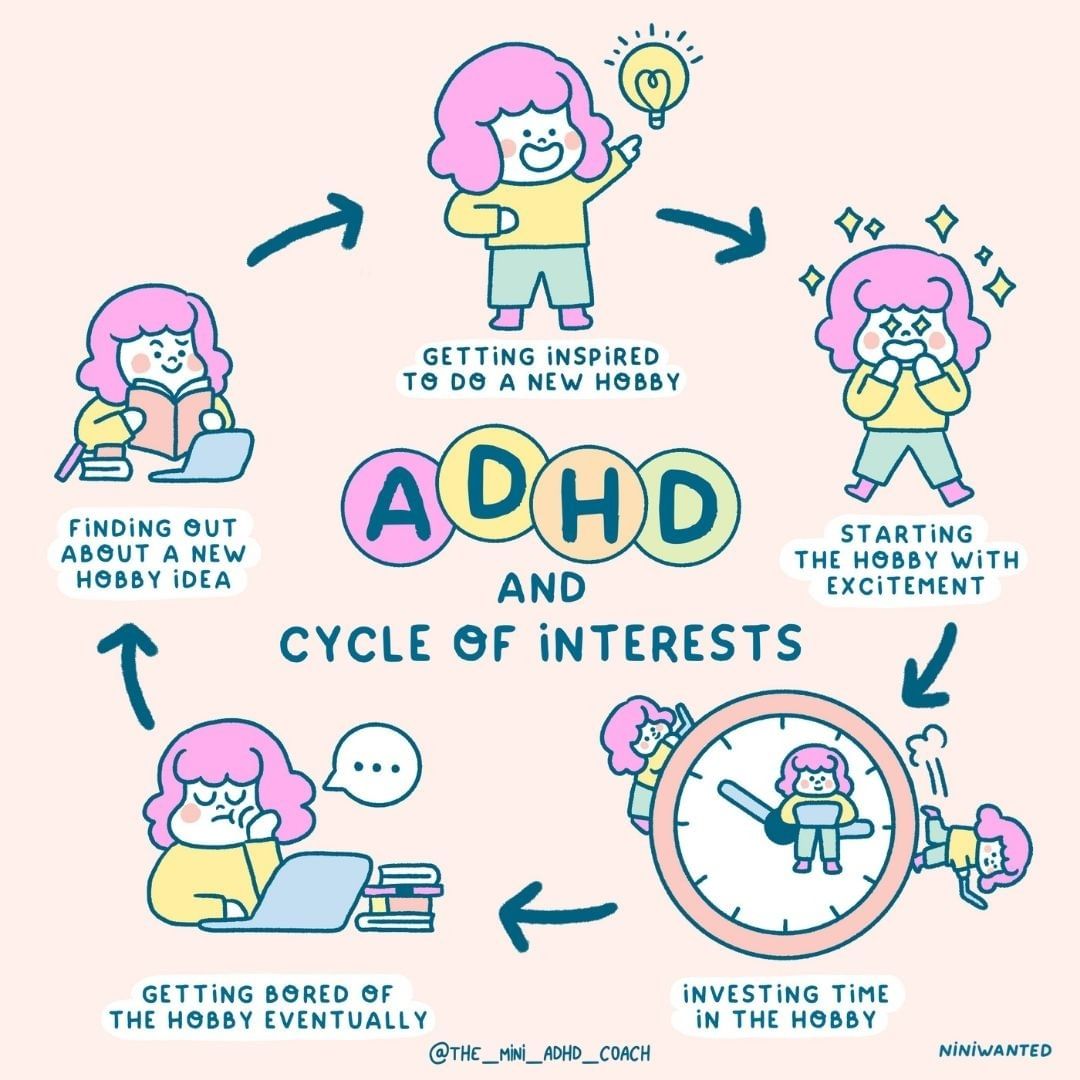 If you have ADHD, you've probably heard about the problem of sustaining interest. It's basically like this: many people with ADHD are easily distracted and shift from one activity to another without finishing what they started. Learn more about it here.

1. Can People with ADHD Have Special Interests?

Can People with ADHD Have Special Interests?

With neurodivergent disorders, common grounds can occur. Sometimes, different mental health conditions can have the same traits, behavior, or symptoms. For example, many people with ADHD may likewise have anxiety disorders or OCD characteristics🤔. These overlapping symptoms may make an official diagnosis difficult to establish as they can be confused with each other.

The same reason can be true for having Special Interests. Many people with Attention Deficit Hyperactivity Disorder tend to experience intense focus and hyperfixation just like their friends with Autism Spectrum Disorder. The intense fixation 🔍😉 that these neurodevelopmental disorders exhibit may help us pursue our sincere interest in something, like playing a video game for an extended period or obsessing over a TV show for days on end. However, the two conditions should not be confused as they are different.

A neurodivergent autistic person is under the category, Autism Spectrum Disorder or ASD. This is because there are other conditions under the ASD umbrella, like Asperger’s Syndrome and an unspecified form of pervasive developmental disorder.

Asperger’s, in particular, a type of autism that is high functioning. Typically, people with Asperger's experience fewer cognitive and language delays than those with other types of autism. They can even be characterized by above-average brain development but struggle with social skills and nonverbal communication 💬. They also tend to exhibit keen interest on one topic or object. However, they may have problems in other areas.

On the other hand, many people with Attention Deficit Hyperactivity Disorder can have a short attention span and cannot stay focused😵. Does that mean they cannot have an interest? Of course, not. They can still experience obsessive interest. However, the interest may not last and could be on anything at any time. In other words, ADHD interests can be unpredictable.

Some people with ADHD can sometimes be easily distracted, have trouble with time management skills ⏲️, and have tendencies to procrastinate. Though most neurodivergent people often have a hard time maintaining focus, a hefty population of ADHD people experiences an extended amount of focus on one thing: their special interest. But one thing always comes into question. Until when?

When adults are hit by something that sparks interest ✨, they are more likely to be curious about it. They have grown interested without being fully aware that they are already starting to visualize things. Somehow, this little spark gets them talking and talking about it for days, making them more excited to learn a few more things about how this hobby can potentially improve their lives.

This is the stage wherein we start to get curious about it- so much that we want to learn everything there is to know about it in one go! And when we finally get our hands on the new interest, we exhibit hyperfocus and disregard everything around us 😵, like having eye contact and social interactions to eliminate the trouble of distraction. Most people who experience hyperfocus can take long hours of learning about their special interests without tiring themselves out. They can move from one resource to another, scouring for more information until they are content.

Unlike autistic people, those with an ADHD diagnosis can have difficulty sustaining their special interest in something. This is what makes the difference between other diagnoses and ADHD. Once we get satisfied with trying a new interest, in a couple of hours or half a day, we'll drop the new-found hobby or activity 🥱 we thought would make us feel good. We get easily discouraged when these moments arrive, especially when we go through all the trouble doing them in the first place.

Since having a special interest in adults with ADHD can be a cycle, we'll reach a point where we'll try another one. For example, I have been learning how to crochet for a good while 🧶, and after I had learned a couple of basic techniques, I started to feel bored and immediately joined a new group teaching me how to play piano. I immediately went to a music store, inquired about an excellent instrument suitable for beginners, and bought it a couple of days after. Guess where the piano is sitting now that I also lost interest in playing it 🎹?

Since ADHD can affect our ability to attain and sustain interests, we have to be patient. We can still be good at them and develop the skills needed to pursue other things we are interested in the future. Though neurotypical people and those with Asperger's syndrome can be good at their craft, many people with ADHD can sometimes be a Jack of all trades 🤾. They can quickly get curious about anything and try to do many things at once without losing focus on the task at hand. So, the next time you see an adult with ADHD, don't be too quick to judge them. They have different ways of looking at the world and pursuing their interests 😘 .

1.  Does ADHD make it hard for you to sustain an interest?

‍
One of the biggest challenges for people with ADHD is sustaining interest. It is not for the lack of interest. In fact, it's quite the opposite. Many people with ADHD are often highly interested in many things, but they have trouble staying focused on any one thing for an extended period of time. This can lead to them bouncing from task to task without completing any of them well or truly getting to know the subject matter.

2. Does ADHD make it impossible for a person to focus?

‍
Absolutely not. In fact, research has shown that a lot of people with ADHD engage in a lot of behavior called hyperfocus, meaning that when something does interest them, they can stay engrossed for hours or days at a time.

3. What ADHD symptoms affect our ability to sustain an interest?

‍
If you have ADHD, it can be hard for you to sustain your interest in something because of how easily distracted you get by things around you. This can affect not only your attention on things you find boring, but also on things that are exciting.

1. Can People with ADHD Have Special Interests?