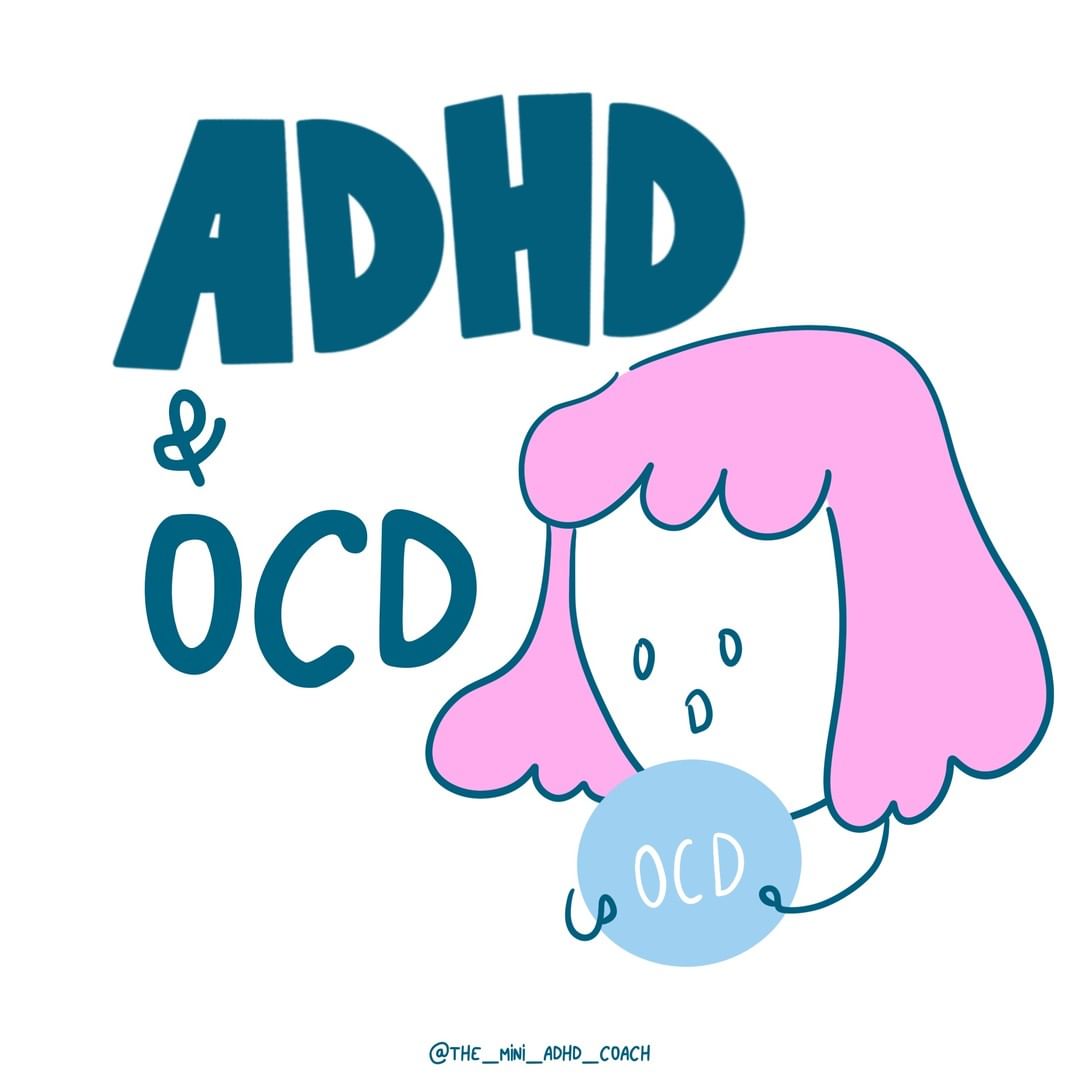 While OCD and ADHD appear to be at the opposite ends of the spectrum, they can still coexist. What happens when a person has both? How can they be managed? Learn more about ADHD & OCD here.

4. The Struggle of People with Both ADHD and OCD

Did you know that people with Attention Deficit Hyperactivity Disorder can experience symptoms of other neurodivergent disorders, making it hard for mental health professionals to diagnose them quickly? 🤔 This can be the case for people with other mental health conditions besides ADHD. In fact, I know many people who have been misdiagnosed with other mental disorders because they also have ADHD.

Of all the people diagnosed with ADHD, approximately 70% have co-occurring mental health disorders, according to the latest research. In addition to ADHD, they may also have Learning Disabilities, Anxiety, Depression, or Behavioral Disorders. According to the systematic and critical review of comorbidities experienced by those with ADHD, two of the most overlooked co-existing conditions are Attention Deficit Hyperactivity Disorder and Obsessive-Compulsive Disorder.

It can sometimes be hard to imagine having ADHD and OCD together because people often stereotype these two disorders as complete opposites. Most people think that ADHD makes children and adults “chaotic.” In contrast, most believe that having OCD means you’re too much of a perfectionist.

But, depending on symptom severity, ADHD and OCD can have overlapping traits that can be strictly connected. Do you wonder if you have both? Let's know more about the ADHD-like symptoms or related information about OCD.

Before we go down deeper and discuss the relationship between OCD and ADHD, let's first know more about Obsessive-Compulsive Disorder and how it was categorized under the mental health condition, Anxiety Disorders.

Obsessive-Compulsive Disorder (OCD) is characterized by intrusive and unwanted thoughts, images, or impulses that trigger intensely distressing feelings or anxiety. People with OCD can also have repetitive behaviors or rituals that we refer to as compulsions to reduce the anxiety that they are feeling.

OCD can often affect a person with high prevalence and functional impairment due to these obsessions and compulsions. OCD is an internalizing disorder wherein the symptoms and actions do not appear chaotic or disruptive. Instead, they occur mostly within the person diagnosed with the condition.

People with OCD can experience obsessive traits because of their unwanted thoughts or fear.  😨 For example, if they are anxious about touching dirty surfaces or chaos, they might constantly clean or arrange things or stuff in a particular order. They might also have compulsions to reduce the anxiety that they are feeling, like hoarding unnecessary things, washing their hands excessively, or frequently checking if they have locked the door or not. Generally, OCD brings a seemingly endless cycle of obsessive thoughts and compulsive behavior.

Knowing more about the different OCD Symptoms can help us break the condition down for better comprehension. Treating OCD and understanding the functional and microstructural substrates in the brain can also provide a better perspective on managing and improving the quality of life of people with OCD.

Let's go into detail about the Obsessive Thoughts that a person may experience having.

OCD-affected individuals may have intrusive thoughts in the initial phase of their disorder. These thoughts are most likely repetitive and unwanted in the form of images, impulses, or worries that a person cannot control. Also, these thoughts are often distressing and can make a person feel uneasy, 😭 especially if there are no coping skills or mechanisms yet to relieve these thoughts.

That's why OCD is categorized under Anxiety Disorders. The intrusive thoughts are usually related to a person's fear and can be about anything that might make them anxious or stressed.

Some of the thoughts that people with OCD tend to have are sexual ideas, fear of harming oneself or others, the presence of contamination by germs, and having dramatic events happening to loved ones. People with OCD can also have religious obsessions like doubting their faith or belittling their religious beliefs. Though these thoughts aren't the same for everyone else, they may share some similarities with other people with OCD.

The onset of these thoughts can be gradual or sudden, without any notice. They are usually recurring and tend to worsen over time without immediate attention and treatment.

It is essential to remember that having these thoughts does not mean that the person will do it in real life. They also might not cause functional impairment once conceived in their brain. It's just that these thoughts can be unsettling and can make a person feel anxious and stressed.

According to the American Psychiatric Association, specific repetitive movements or behaviors are done to reduce the anxiety that a person is feeling. These compulsions are usually in response to an obsession and can be done excessively.

Compulsions can be considered an impulse control disorder wherein a person has difficulty resisting the urge to do something that might be harmful to oneself or others.

Since Obsessive-Compulsive Symptoms are internalizing disorders in nature, some of the common compulsions that people with OCD might have only involved them. These compulsions can be excessive handwashing, checking if something is turned off or not multiple times, counting, tapping, and touching. Many people with OCD can also have ordering and arranging compulsions wherein they must put things in a particular way or order. They can also have hoarding tendencies wherein they need to save everything for future use.

According to studies, people with Obsessive-Compulsive Disorder (OCD) are prone to "Executive Overload," 😵 wherein they experience an "overflow" of obsessive thoughts that can increase the frontostriatal brain activity (executive overload), which then leads to the development of compulsions.

Being obsessive-compulsive can be challenging and take a toll on a person's mental and emotional well-being. Having unwanted thoughts and behavior that cannot be avoided unless acted upon can be really exhausting. But what if these very different patterns affect a person with ADHD as well?

The Struggle of People with Both ADHD and OCD

According to research, ADHD can be considered an externalizing disorder. It means that Attention Deficit Hyperactivity Disorder (ADHD) Symptoms might also affect other people.

Come to think of it, symptoms of ADHD like inattention, hyperactivity, impulsiveness, and emotional dysregulation can negatively affect other people. It can also be challenging for a person with ADHD to have healthy and long-lasting relationships with others.

But, the thing is, those diagnosed with ADHD can also have a hard time dealing with Obsessive-Compulsive Disorder. Even though the conditions are somehow at the opposite sides of the spectrum, they can still coexist.

People coping with sudden symptoms of hyperactivity disorder and obsessions can find it very challenging 😔 because each condition has its own management, and the symptoms of one can worsen the symptoms of the other.

Sometimes, symptoms of ADHD, like being forgetful, might look like it has nothing to do with Obsessive-Compulsive Disorder. However, if we look closer, OCD symptoms may make us check the details again and again because we have forgotten if we have already accomplished it or not. ADHD and OCD can make us have difficulty focusing on these small details or, sometimes, affect our working memory, making us more anxious.

Another example of how these disorders are related has something to do with perfectionism. OCD Diagnosis might make us have compulsions to achieve perfection. On the other hand, people with ADHD might also be perfectionists because of their need for stimulation. They need to do things in an interesting way or else they will get bored quickly. Our brain activity might make us do things excessively because we need to achieve a certain level of perfection, which can be exhausting.

Since ADHD and OCD can coexist, sometimes, mental health professionals have a hard time giving an accurate diagnosis and treatment options.👩‍⚕️  It can be tough to pinpoint if the person is only experiencing symptoms of one disorder or both.

Although mental health professionals use the Diagnostic and Statistical Manual for Mental Health Conditions to determine the symptoms of a person for these disorders, it can still be challenging to distinguish one from the other. This is because the symptoms of these disorders might overlap. Obsessive-Compulsive symptoms may mask themselves under ADHD symptoms, which both affect the brain's executive functioning. These can cause cognitive switching difficulties, working memory inflexibility, and repetitive behavior.

Since OCD and ADHD are both neurodivergent disorders, there's a possibility of OCD and ADHD dual diagnosis misdiagnosis. 🥺 ADHD and OCD diagnoses are given to a person because of symptom dimensions that are not well-matched with a specific disorder.

Getting an accurate diagnosis for these disorders is essential because the treatment options might differ. Treatment implications for both ADHD and OCD may have a direct effect on each other. For instance, stimulant medications usually prescribed for people with ADHD can also trigger greater OCD severity. This is because these medications can increase the level of dopamine in our brain, making us more hyperactive, have difficulty focusing, and be impulsive.

Of course, there are other instances where an OCD diagnosis, treatment, and medications make ADHD symptoms worse.

Others perceive OCD and ADHD as opposites. But both ADHD and OCD can affect our executive function, giving us difficulty in response inhibition, decision-making, planning, task-switching, and working memory. This is why it is vital to understand every facet of having OCD and ADHD prevalence inside our brain.

Here are the things you can take into account to manage Obsessive-Compulsive Disorder (OCD) and Attention Deficit Hyperactivity Disorder (ADHD):

Two disorders that may look precisely opposite can still coexist. When ADHD symptoms, like hyperactivity and impulsiveness, and Obsessive-Compulsive traits such as having unwanted thoughts and compulsions, are present, it can be challenging to manage. But with the proper understanding, education, and professional help, you can learn to live a more joyful and manageable life. 😘

1.  How is OCD different from ADHD?

‍
While ADHD is characterized by disrupting and chaotic symptoms of inattention, hyperactivity, and impulsivity, OCD is an internalizing disorder. This means its symptoms are confined within the person diagnosed. Often, a person with OCD has obsessive thoughts that lead to anxiety and they perform compulsions to ease the anxiety.

2. Is it possible for OCD and ADHD to coexist even though they appear to be opposites?

‍
Yes, they can coexist.

3. How can you manage both conditions if you have them at the same time?

‍
The most important part of managing both ADHD and OCD is to consult a mental health professional. This is so you can receive an accurate diagnosis and appropriate treatment.

4. The Struggle of People with Both ADHD and OCD