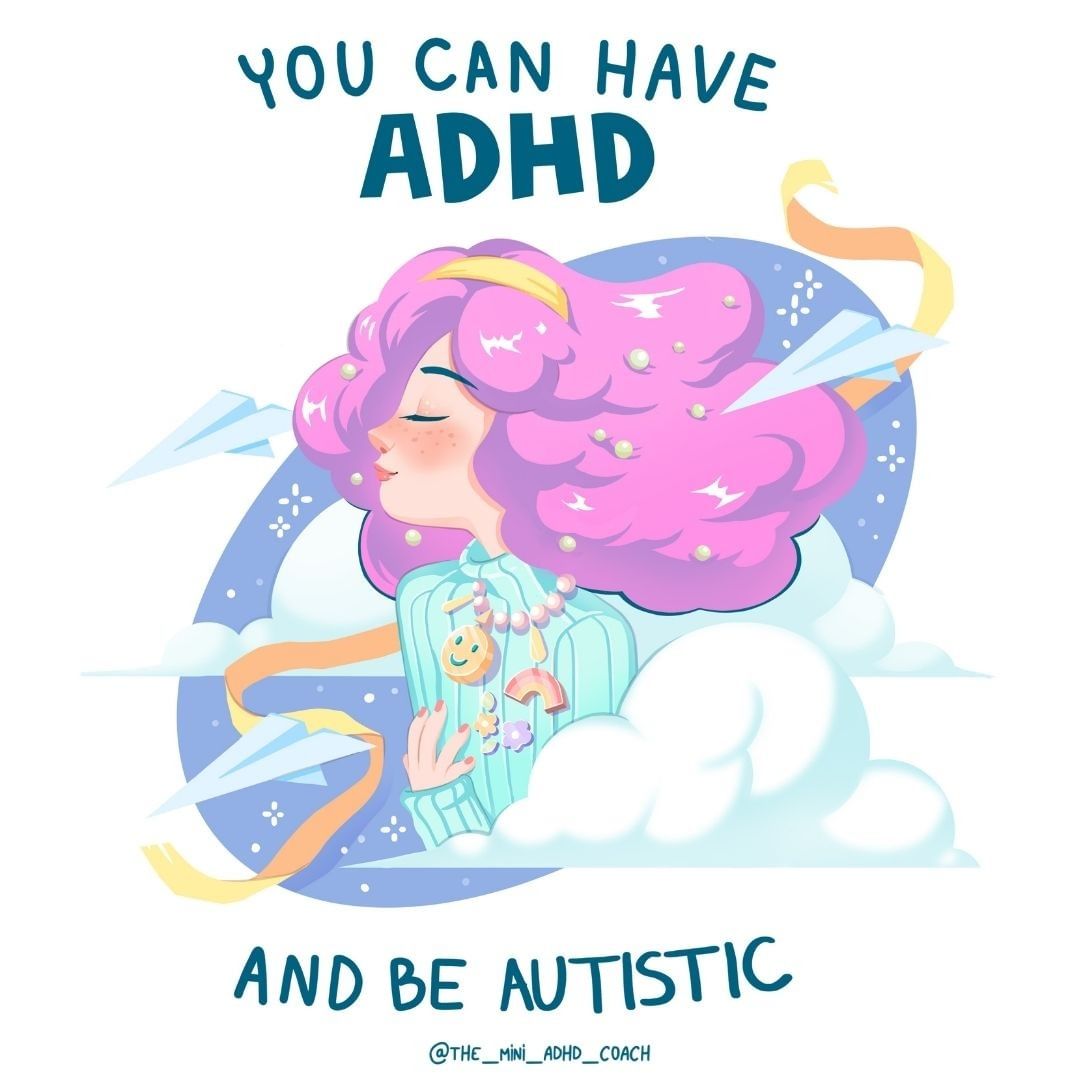 Reports say it’s common for ADHD and ASD to coexist. But, how do you distinguish one from the other? More importantly, how do you address having both neurodivergent conditions? Learn more about ADHD and ASD here.

You Can Have ADHD and Be Autistic

1. Is it ADHD or ASD? Is it Possible to Have Both?

2. What is Autism Spectrum Disorder?

4. The Overlapping ADHD and Autism Experience

5. The Co-Occurrence of Autism and ADHD

6. The Importance of Having the Right Diagnosis

You Can Have ADHD and Be Autistic FAQs

Is it ADHD or ASD? Is it Possible to Have Both?

When reading through comments and feedback from our followers on our Instagram account, I often see people saying, "These are ASD symptoms as well." or " I was diagnosed with autism, and I didn't know that these are ADHD symptoms, too." Hence, it often makes me wonder how many people lack awareness of the comorbidity between these two disorders 🤔.

According to research, both Autism Spectrum Disorder (ASD) and Attention Deficit Hyperactivity Disorder (ADHD) are neurodevelopmental disorders, a group of conditions where the growth and development of the brain are affected 🧠.

As such, ASD and ADHD share a lot of common symptoms and can overlap with each other. Several traits can likewise be mistaken as a symptom of the other, such as trouble paying attention, communication skills issues, and social interaction difficulties. The good news is that even if these similarities can be pretty confusing to base a diagnosis on, there are still distinct differences between the cause of these traits 👌.

But before we dive deeper into these distinct conditions, let us first try to know them individually - after all, ADHD and Autism Spectrum Disorder are still different from each other. To have a correct diagnosis, it is crucial to understand the symptoms of each one separately.

What is Autism Spectrum Disorder?

According to the National Institute for Mental Health, Autism Spectrum Disorder is a neurodivergent disorder that affects “how people interact with others, communicate, learn, and behave.”

Autism Spectrum Disorders are classified into these five types depending on the risk factors present, history, behavior, and severity of symptoms in an individual:

Several diagnostic criteria should be met for an ASD diagnosis, such as persistent deficit in social communication and social interaction, or restricted, repetitive behaviors, interests, and activities. Language skills, eye contact 👀, and nonverbal communication abilities can also be considered when checking for autism symptoms.

On the other hand, an ADHD diagnosis involves difficulty sustaining attention, having hyperactive-impulsive traits, or difficulty focusing on specific tasks. These ADHD symptoms are classified into three categories based on the predominant ADHD trait a person experiences. Once given an ADHD diagnosis, you can be categorized into one of these three ADHD types:

Unlike the intensity of autistic traits as a basis for the autism category, Attention Deficit Hyperactivity Disorder depends on the types of symptoms that an individual can experience. According to the Diagnostic and Statistical Manual for Mental Disorders, ADHD can be diagnosed while taking into account the age at which these ADHD traits manifested, the settings wherein these symptoms manifest, and how much they affect their everyday functioning.

Aside from the difficulty of a person with Attention Deficit Hyperactivity Disorder on impulse control and organizational skills, ADHD can also affect a person's social skills, focus or interest in a topic, and learning - similar to  those with ASD. So, how do we distinguish which from which if they have overlapping symptoms? How can we properly treat ADHD without disregarding other developmental disorders? 😕

The Overlapping ADHD and Autism Experience

You might get confused about why ADHD and autism affect a person's social interactions or how both can cause attention issues to essential tasks. Remember that Attention Deficit Hyperactivity Disorder and Autism Spectrum Disorder share some symptoms as they are both neurodevelopmental disorders. That means specific symptoms can have the same effect on a person but may have different root causes. But, of course, because they are different disorders still, the other symptoms can be pretty distinguishable.

For example, while genetics may play a role in both ADHD and ASD, and both may affect the executive functions, ADHD typically poses an increased risk of disorganization, difficulty waiting, or emotional dysregulation. On the other hand, in Autism Spectrum Disorder, the effect on executive functioning may be repetitive behaviors, insistence on sameness, or restricted interests.

Another overlapping effect of ADHD and ASD can be seen in how we handle social difficulties 🧑‍🤝‍🧑. People with Autism Spectrum Disorder may find it hard to read social cues or body language, make friends, or understand other people's perspectives. ADHD individuals, on the other hand, may find it hard to take turns in conversations, interrupt others often, or intrude on personal space without realizing it.

Autism and ADHD may share a lot in common, but we need to understand that they are different from each other. In order to have a correct diagnosis, it is essential to consult with a professional 👩‍⚕️ who can give an accurate assessment and create a treatment plan that will focus not only on the developmental disorder but on the person as a whole.

The Co-Occurrence of Autism and ADHD

Since we’re discussing ADHD and ASD, did you know that more than half of autistic children and adults have comorbid ADHD diagnoses? The report says those on the autism spectrum have a fifty to seventy percent chance of also having ADHD.

There are several explanations for this high comorbidity rate between both neurodevelopmental disorders. One reason is that the affected brain function for both neurodivergent disorders may be linked since they share some common symptoms and traits. According to more research, there may be a “genetic overlap” between those who have both disorders.

Another explanation is that the comorbidity rate is high because of how we diagnose these disorders. Some children may have more symptoms for either condition, making it difficult to place them into one category or the other. The fifth version of the Diagnostic and Statistical Manual places autism and ADHD as two conditions that can coexist in an individual.

As both Attention Deficit Hyperactivity Disorder (ADHD) and autism share similar symptoms and can manifest simultaneously, mental health professionals must be careful in differentiating which is which. The diagnosis process begins with a clinical assessment where the professional will ask questions about the individual's development, social and language skills, and behavior patterns.

The Importance of Having the Right Diagnosis

As ADHD and Autism can be mistaken for each other and coexist, it is essential to understand the underlying condition and have a proper diagnosis for your mental health condition. Children diagnosed with ADHD, ASD, or both should have the appropriate treatment and medication to manage their condition 💊.

According to the Centers for Disease Control and Prevention (CDC), some specific treatments and therapies can help those with ADHD and Autism. Applied Behavior Analysis (ABA) is one type of behavioral therapy that is recommended for children with autism as it can help improve learning, communication, and social skills. Likewise, Cognitive Behavior Therapy can also be suggested for people who experience symptoms of ADHD.

Also, we can improve parent training techniques 👪to guide children with ADHD and autism on the social challenges they may encounter. We can help them practice how to make and keep friends as well as how to have age-appropriate conversations. We can also role-play different social scenarios that may be difficult for them so they know how to react when placed in those situations.

Lastly, talking with and seeking advice from your mental health professional matters👩‍⚕️. A child's doctor may not be able to answer all your questions, but they will have the appropriate resources and referrals to help you. Adolescent psychiatry or psychology may be a better fit for teenagers and young adults to help you understand their thoughts and emotions. But whichever age-dependent professional you approach, remember to ask for available accommodations. Whether for ADHD medication or ASD services, it is crucial to have the proper diagnosis for you or your child.

You Can Have ADHD and Be Austistic: FAQs (Frequently Asked Questions)

1.  Is ADHD and ASD the same? How do you distinguish one from the other?

‍
ADHD and ASD are both neurodevelopmental disorders and some speculate that they have a genetic overlap, but the two are still different conditions. While ASD can make it hard for a person to express themselves and communicate with others, ADHD, on the other hand, mostly poses issues on hyperactivity, inattention, or both.

2. Can ADHD and ASD coexist in a person?

‍
Yes. In fact, it’s common for a person with ASD to also have ADHD.

3. What do you need to do if you have both ASD and ADHD?

‍
The first and most important step is to work closely with a mental health professional. From there, you can receive appropriate assessment and treatment.

You Can Have ADHD and Be Autistic ━ Written by The Mini ADHD Coach ━ Updated on Nov 21, 2022

You Can Have ADHD and Be Autistic

1. Is it ADHD or ASD? Is it Possible to Have Both?

2. What is Autism Spectrum Disorder?

4. The Overlapping ADHD and Autism Experience

5. The Co-Occurrence of Autism and ADHD

6. The Importance of Having the Right Diagnosis

You Can Have ADHD and Be Autistic FAQs